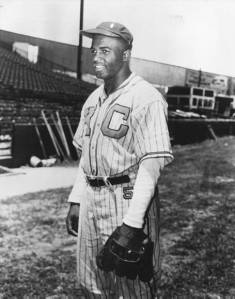 Jules Tygiel and I collaborated on this story forSPORT magazine in June 1988. Subsequently it appeared in SABR’s The National Pastime, in several editions of Total Baseball, and in Jules’s Extra Bases: Reflections on Jackie Robinson, Race, and Baseball History. Despite this drumbeat of evidence, the legend surrounding Jackie Robinson’s signing has persisted. Jules and I believed that the real story was not only more interesting than the schoolboy version but also made Jackie’s pioneering mission even more heroic.

October 1945. As the Detroit Tigers and Chicago Cubs faced off in the World Series, photographer Maurice Terrell arrived at an almost deserted minor-league park in San Diego, California, to carry out a top-secret assignment: to surreptitiously photograph three black baseball players.

Terrell shot hundreds of motion-picture frames of Jackie Robinson and the two other players. A few photos appeared in print but the existence of the additional images remained unknown for four decades. In April 1987, as Major League Baseball prepared a lavish commemoration of the fortieth anniversary of Robinson’s debut, I unearthed a body of contact sheets and unprocessed film from a previously unopened carton donated in 1954 by Look magazine to the Baseball Hall of Fame in Cooperstown, New York. This discovery triggered an investigation which led to startling revelations regarding Branch Rickey, the president of the Brooklyn Dodgers, and his signing of Jackie Robinson to shatter baseball’s longstanding color line; the relationship between these two historic figures; and the stubbornly controversial issue of black managers in baseball.

The popular “frontier” image of Jackie Robinson as a lone gunman facing down a hostile mob has always dominated the story of the integration of baseball. But new information related to the Terrell photos reveals that while Robinson was the linchpin in Branch Rickey’s strategy, in October 1945 Rickey intended to announce the signing of not just Jackie Robinson, but of several other Negro League stars. Political pressure, however, forced Rickey’s hand, thrusting Robinson alone into the spotlight. And in 1950, after only three years in the major leagues, Robinson pressed Rickey to consider him for a position as field manager or front-office executive, raising an issue with which the baseball establishment grappled long after.

The story of these revelations began with the discovery of the Terrell photographs. The photos show a youthful, muscular Robinson in a battered cap and baggy uniform fielding from his position at shortstop, batting with a black catcher crouched behind him, trapping a third black player in a rundown between third and home, and sprinting along the basepaths more like a former track star than a baseball player. All three players wore uniforms emblazoned with the name “Royals.” A woman with her back to the action is the only figure visible amid the vacant stands. The contact sheets are dated October 7, 1945.

The photos were perplexing. The momentous announcement of Jackie Robinson’s signing with the Montreal Royals took place on October 23, 1945. Before that date his recruitment had been a tightly guarded secret. Why, then, had a Look photographer taken such an interest in Robinson two weeks earlier? Where had the pictures been taken? And why was Robinson already wearing a Royals uniform?

I called Jules Tygiel, the author of Baseball’s Great Experiment: Jackie Robinson and His Legacy, to see if he could shed some light on the photos. Tygiel knew nothing about them, but he did have in his files a 1945 manuscript by newsman Arthur Mann, who frequently wrote for Look. The article, drafted with Rickey’s cooperation, had been intended to announce the Robinson signing but had never been published. The pictures, Jules and I concluded, were to have accompanied Mann’s article; we decided to find out the story behind the photo session.

The clandestine nature of the photo session did not surprise us. From the moment he had arrived in Brooklyn in 1942, determined to end baseball’s Jim Crow traditions, Rickey had feared that premature disclosure of his intentions might doom his bold design. No blacks had appeared in the major leagues since 1884 when two brothers, Welday and Moses Fleetwood Walker, had played for Toledo in the American Association. [In recent years an earlier African American major leaguer has been identified: William Edward White, a one-game first baseman for Providence of the National League in 1879.] Not since the 1890s had black players appeared on a minor-league team. During the ensuing half-century all-black teams and leagues featuring legendary figures like pitcher Satchel Paige and catcher Josh Gibson had performed on the periphery of Organized Baseball.

Baseball executives, led by Commissioner Kenesaw Mountain Landis, had strictly policed the color line, barring blacks from both major and minor leagues. Rickey therefore moved slowly and secretly to explore the issue and cover up his attempts to scout black players during his first three years in Brooklyn. He informed the Dodger owners of his plans but took few others into his confidence.

In the spring of 1945, as Rickey prepared to accelerate his scouting efforts, advocates of integration, emboldened by the impending end of World War II and the recent death of Commissioner Landis, escalated their campaign to desegregate baseball. OnApril 6, 1945, black sportswriter Joe Bostic appeared at the Dodgers’ Bear Mountain training camp with Negro League stars Terris McDuffie and Dave “Showboat” Thomas and forced Rickey to hold tryouts for the two players. Ten days later black journalist Wendell Smith, white sportswriter Dave Egan, and Boston city councilman Isidore Muchnick engineered an unsuccessful ninety-minute audition with the Red Sox for Robinson, then a shortstop with the Kansas City Monarchs; second baseman Marvin Williams of the Philadelphia Stars; and outfielder Sam Jethroe of the Cleveland Buckeyes.  In response to these events the major leagues announced the formation of a Committee on Baseball Integration. (Reflecting Organized Baseball’s true intentions on the matter, the group never met.)

In the face of this heightened activity, Rickey created an elaborate smokescreen to obscure his scouting of black players. In May 1945 he announced the formation of a new franchise, the Brooklyn Brown Dodgers, and a new Negro League, the United States League. Rickey then dispatched his best talent hunters to observe black ballplayers, ostensibly for the Brown Dodgers, but in reality for the Brooklyn National League club.

A handwritten memorandum in the Rickey Papers at the Library of Congress offers a rare glimpse of Rickey’s emphasis on secrecy in his instructions to Dodger scouts. The document, signed “Chas. D. Clark” and accompanied by a Negro National League schedule for April-May 1945, is headlined “Job Analysis,” and defines the following “Duties: under supervision of management of club”:

1. To establish contact (silent) with all clubs (local or general).

2. To gain knowledge and [sic] abilities of all players.

3. To report all possible material (players).

5. Keep composite report of outstanding players . . . To travel and cover player whenever management so desire.

Clark’s directions, however, contain one major breach in Rickey’s elaborate security precautions. According to his later accounts, Rickey had told most Dodger scouts that they were evaluating talent for a new “Brown Dodger” franchise. But Clark’s first “Objective” was “To Cover Negro teams for possible major league talent.” Had Rickey confided in Clark, a figure so obscure as to escape prior mention in the voluminous Robinson literature? Dodger superscout and Rickey confidante Clyde Sukeforth had no recollection of Clark when Jules spoke with him, raising the possibility that Clark was not part of the Dodger family, but perhaps someone connected with black baseball. Had Clark himself interpreted his instructions in this manner?

Whatever the answer, Rickey successfully diverted attention from his true motives. Nonetheless, mounting interest in the integration issue threatened Rickey’s careful planning. In the summer of 1945 Rickey constructed yet another facade. The Dodger president took into his confidence Dan Dodson, a New York University sociologist who chaired Mayor Fiorello LaGuardia’s Committee on Unity, and requested that Dodson form a Committee on Baseball ostensibly to study the possibility of integration. In reality, the committee would provide the illusion of action while Rickey quietly completed his own preparations. “This was one of the toughest decisions I ever had to make while in office,” Dodson later confessed. “The major purpose I could see for the committee was that it was a stall for time. . . . Yet had Mr. Rickey not delivered . . . I would have been totally discredited.”

Thus by late August, even as Rickey’s extensive scouting reports had led him to focus on Jackie Robinson as his standard bearer, few people in or out of the Dodger organization suspected that a breakthrough was imminent. On August 28 Rickey and Robinson held their historic meeting at the Dodgers’ Montague Street offices in downtown Brooklyn. Robinson signed an agreement to accept a contract with the Montreal Royals, the top Dodger affiliate, by November 1. 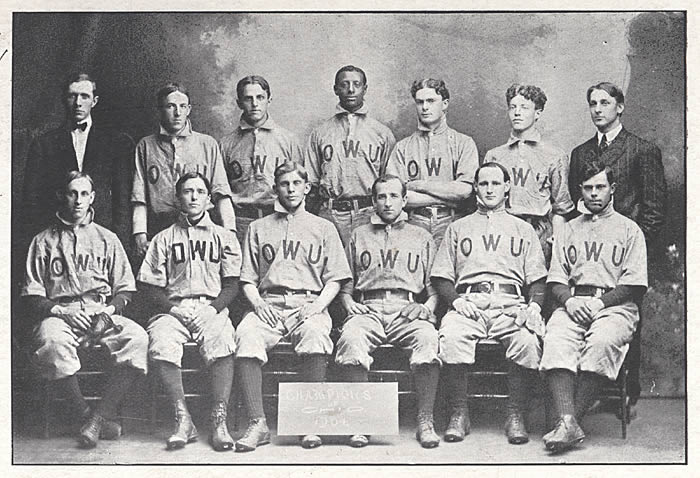 Rickey, still concerned with secrecy, impressed upon Robinson the need to maintain silence. Robinson could tell the momentous news to his family and fiancee, but no one else. For the conspiratorial Rickey, keeping the news sheltered while continuing arrangements required further subterfuge. Rumors about Robinson’s visit had already spread through the world of black baseball. To stifle speculation Rickey “leaked” an adulterated version of the incident to black sportswriter Wendell Smith. Smith, who had recommended Robinson to Rickey and advised Rickey on the integration project, doubtless knew the true story behind the meeting. On September 8, however, he reported in thePittsburgh Courier that the “sensational shortstop” and “colorful major-league dynamo” had met behind “closed doors. . . . The nature of the conference has not been revealed,” Smith continued. Rickey claimed that he and Robinson had assessed “the organization of Negro baseball,” but Smith noted that “it does not seem logical [Rickey] should call in a rookie player to discuss the future organization of Negro baseball.” He closed with the tantalizing thought that “it appears that the Brooklyn boss has a plan on his mind that extends further than just the future of Negro baseball as an organization.” The subterfuge succeeded. Neither black nor white reporters pursued the issue.

Rickey, always sensitive to criticism by New York sports reporters and understanding the historic significance of his actions, also wanted to be sure that his version of the integration breakthrough and his role in it be accurately portrayed. To guarantee this he persuaded Arthur Mann, his close friend and later a Dodger employee, to write a 3,000-word manuscript to be published simultaneously with the announcement of the signing.